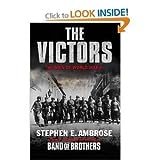 The Victors: The Men of World War II

Journal Entry 1 by lohkom from Seoul, Soul-t'ukpyolsi South Korea on Wednesday, August 28, 2013
Very well written and informative history on the invasion of and liberation of Europe by the Allied forces against the Nazis. The interplay between Eisenhower and Marshall Montgomery was something unknown to me. In the end, it was made clear that despite all the planning and strategy, it remained the join of the grunt on the ground who carried the day and brought on the victory. Their lot was not easy, happy, or glamorous but these people met their countries' call and answered it. Good read.

Journal Entry 2 by lohkom at MWR Library on Yongsan Army Base in Seoul, Soul-t'ukpyolsi South Korea on Wednesday, August 28, 2013

Released 8 yrs ago (8/28/2013 UTC) at MWR Library on Yongsan Army Base in Seoul, Soul-t'ukpyolsi South Korea

Got this by mail order and it did not disappoint. Enjoyed it. This will likely be picked up quickly from the free book exchange bin since the library is a military one!

"A book is not harmless merely because no one is consciously offended by it."