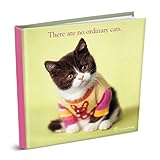 There Are No Ordinary Cats (Rachael Hale Gift Books)

by Rachael Hale | Pets & Animals | This book has not been rated.
ISBN: 1904264271 Global Overview for this book
Registered by

from Christchurch, Canterbury New Zealand on Sunday, February 10, 2013
Bought at the local church in Corsham

Didn't realise that it was almost the same as the other cat book. Still it has cute cats in it.

I've got one of the pictures from this book on a fridge magnet, and I think I've had a couple of others on birthday cards - didn't realise she was a NZ photographer.

One of 11 cat-themed books released around Deans Bush this morning to celebrate my 11th anniversary as a bookcrosser.

"There is no such thing as a moral or an immoral book. Books are well written or badly written. That is all."