Artist Mary Whyte moved with her husband to a small South Carolina barrier island ten years ago and quite by accident met a group of senior citizens who were making quilts in a small, abandoned church. Longtime residents of Johns Island and descendents from slaves, this extraordinary group of African American women changed Whyte's life and paintings in an astonishing and unexpected way. What resulted is a decade-long journey that chronicles the Gullah way of life, as well as a rapidly changing culture.

Whyte uses the watercolor medium to its fullest advantage, producing rich, dark tones and textures that are characteristic of African American skin as well as the pale, translucency, of lighter skinned people. Her combination of tightly controlled brushstrokes and lose, broad sweeps of washes, coupled with contrasts of light and dark, produce a level of intensity not usually associated with watercolor. After absorbing one of Whyte's paintings for the first time, the viewer is sometimes surprised to learn that all this was accomplished in watercolor. Her use of mostly transparent pigments make her work appear like stained glass, while her use of hard and soft edges, limited backgrounds, and simple poses bring into focus for the viewer what Whyte feels is important.

Whyte senses the profound in the simplest of daily moments, such as an old woman threading a needle or a young girl sleeping. When we peer into the faces Whyte paints, we are drawn in deeply and this crosses the line from being a casual viewer to one who is somehow inexplicably involved. We sense Whyte's models are not just posing, but going and gazing directly at us, it is only for a fleeting moment, for at any second she may rise and move into the next room to finish a chore.

The people in Whyte's work are unquestionably real. Though Whyte paints men and boys with ease, most of her models are grandmothers and great-grandmothers or their offspring, with the artist noting the characteristics and features handed down through the generations. Whyte caputres a sense of vulnerability, longing and digninty in the female models she paints. She understands the sanctity of the female domain, and this is given entree into the her models' homes, where she is trusted to quietly come and go, sketching or painting. As the viewer, we sense this privilege as we gaze at her painting of Georgeanna in the kitchen intenlty stirring a big pot of steaming collard greens or a simple head study of Alfreda wearing her Sunday hat and looking out the window.

For Whyte, inspiration is discovered daily. An enourmous oak tree along the side of the road near her home, its hollow interior large enough to stand inside, prompted the idea for "Raccoon". For another painting, the diminutive size of a pre-schooler at a neighborhood day care center became the genedid for "Inchworm". The title of the work refers to the model's stature as well as the tiny creature she is studying on her finger.

When viewing the works of Mary Whyte, we are aware that we are seeing through the eyes of a painter who is not of color and has never experienced the hardships or joys of being African American in America. In the end, this anomaly may be what makes her works more compelling. Whyte's watercolors show us not only what it is like to be African American and living the Gullah tradition in South Carolina, but at the same time, what it feels like to one who is not. More importantly, Whyte invokes in the viewer a sense of compassion for another human being, as well as the discovery that upon closer inspection, we are looking into the mirror at ourselves.

In 2001 she was awarded first place in the Florence, South Carolina Museum Statewide Art Competition for her image of "Sister Heyward", and the piece titled "Dream of the Ancestors" was awarded the Savoir-Faire award at the California Watercolor Association National Exhibition. Whyte is a graduate of the Tyler School of Art in Philadelphia, Pennsylvania.

Perhaps best known for her distinctive portraits, Whyte has traveled the country capturing personalities on canvas and paper. Whether of a child in a tree or a judge in official robes, Whyte’s portraits grace hundreds of private homes, universities and corporate collections. Her work is included in numerous collections such as that of Bell Atlantic in Arlington, Virginia, The Easter Seals Society, West Chester University, Gwynedd Mercy College, Heritage Beverage Company, The Penn Club in New York City, The University of Pennsylvania, Medical University of South Carolina, Wabash College, Genesee Bank, and the Banco di Roma in Rome, Italy.

An avid teacher and writer, Whyte conducts painting workshops each year in different locations across the country. Several of her articles have been featured in American Artist, The Artist's Magazine and Watercolor magazine. The popular instructional book, "Watercolor for the Serious Beginner", written entirely by Whyte, was published by Watson-Guptill and is now in its seventh printing. Whyte's newly authored book, (pictured at left), is scheduled for release in May 2003. The book focuses on the stories of friendships and life lessons that have been shared between Whyte and the older Gullah women of Johns Island. Over 35 watercolors and pencil sketches from her Lowcountry Series will be included.

Over a dozen children's books have been illustrated by Whyte including three for a publisher in Japan. Many of the illustrations are now in collections of private individuals and institutions including the Mazza Collection of Children's Book Illustrations of the University of Findlay in Ohio. 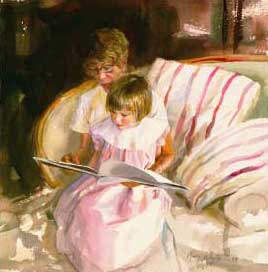 "When I am dead
I hope it may be said:
'His sins were scarlet
but his books were read.'"