Releasing a book in a cave 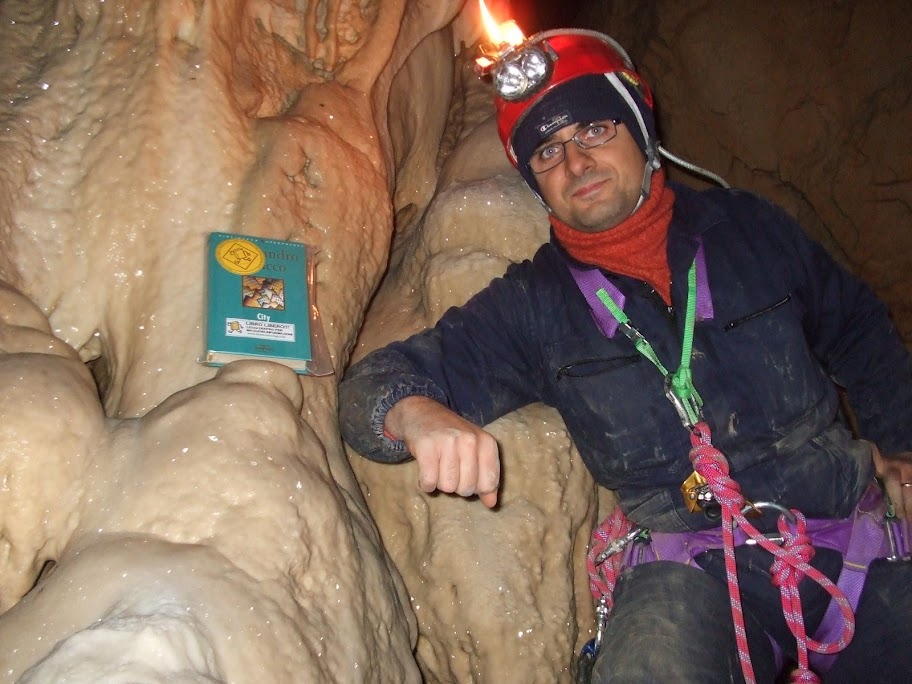 Saturday October the 8th, 2008, at the caves 'i vucculi' at Murro Lucano, I've had the proper conclusion of an adventure that I lived attending the course of caving organized by GSS (Speleological Group of Statte (TA)). To make it a memorable day, I brought with me a book registered on the BookCrossing site, properly sealed into an envelope to be released in the cave.

I had the luck of knowing Filippo amongst the local people - a journalist, photographer and lover of nature and reading- who has promptly shown a lot of interest in toward BookCrossing. He has already written an article about BookCrossing in his association's website.

Since I was a little boy, after seeing the movie 'Journey to the center of the earth" drawed from the famous novel by Jules Verne, I dreamt of exploring the entrails of our planet and I visited some so-called "touristic caves" where you can follow a simple path. Nothing to do with what I have done during the course.

Entering into small ravines that extend in huge pits, only being hooked up to the rope, the path lightened only by the feeble flame of the acetylene, placed to the top of the caver helmet. The chill, the dampness, and the deep darkness and silence are the enemies to be fought in an environment hostile to humans as the cave is.
The equipment is of great help to those who, like me, has no athletic features, but it cannot provide the brain: you must think about what you do before acting, if you just think that our life is literally hanging by a thread. Work TEAM: in this activity more than in any other, is a fundamental rule that the GSS managed to send me pretty well.

Releasing a book in there, has been a powerful thought for my last excursion, and, who knows? Maybe it will have more fortune that those released on the warmth of the planet ;)

"I was gravely warned by some of my female acquaintances that no woman could expect to be regarded as a lady after she had written a book."